Saint-Tropez Bay France is one of the most beautiful in Europe. Saint-Tropez – the most fashionable seaside resort of the French Riviera. It has long been a place only for rich and famous. However, today it is open to all.

Once it was a small fishing village, today Saint-Tropez is one of the most famous points of the world: picturesque beaches, extensive pine forests, well-groomed parks and alleys, an abundance of elite shops and restaurants. 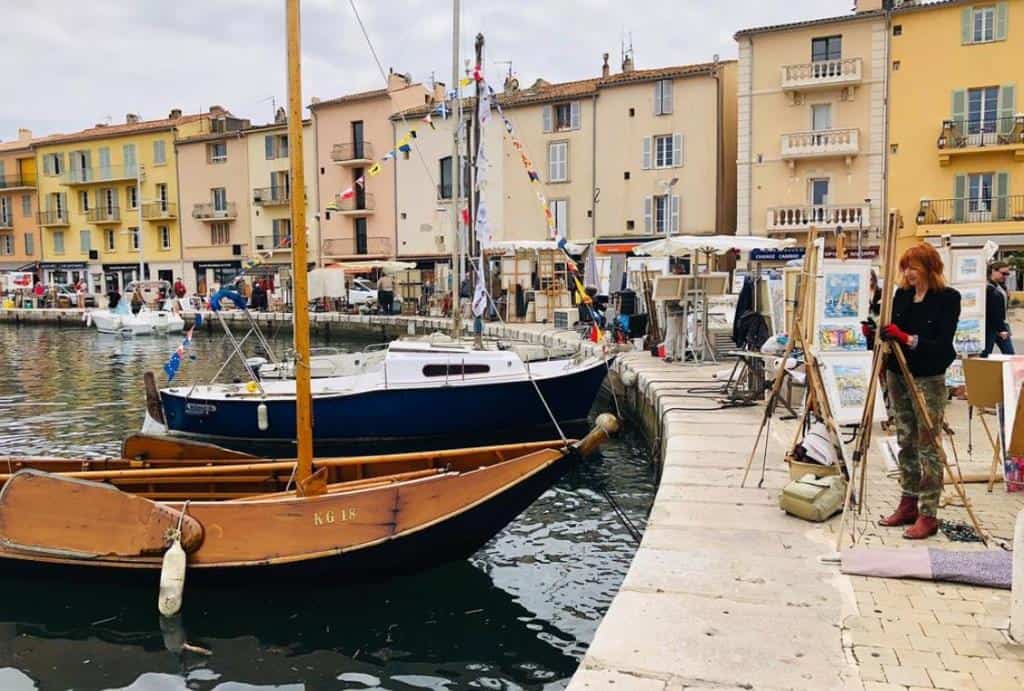 Content hide
1 Saint-Tropez – Pearl of the Cote d’Azur
2 Sentrophe: Attractions
3 Saint-Tropez: Beaches
4 how to get?

Saint-Tropez – Pearl of the Cote d’Azur

In the 15th century, when a citadel was built with fortifications, Saint-Tropez began to form from the fishing village to the city. Since 1950, intensively tourism develops, and the city becomes a famous resort.

interesting!in the summer Saint-Tropez fashionable seaside resort, where the VIP-person people come out from around the world. To admire their luxurious sailing boats and yachts, visitors can stroll along the harbor in the “old” and “new port”.

The famous Pier Saint-Tropez is divided into two parts: “New Harbor” and “Old Harbor”. This is one of the most popular photographing places in the city, especially at sunset. The harbor embankment with sailing boats and luxurious yachts on the one hand, and the picturesque facades of houses, elegant boutiques, restaurants and cafes – on the other.

This city is one of the most popular tourist destinations around the world. In the city you can see delicious sights: the incredible number of old chapels and churches has been preserved. The old town of Saint-Tropez, known as La Ponch – the historic center of the fishing village and the most picturesque area. It borders with the harbor of the “Old Port” and is located below the Citadel.

Being in the “New Harbor”, it is necessary to walk to a unique citadel. Small narrow streets lead past picturesque yards decorated with olive trees. You can walk to the Lys Square, and in the old historic village enjoy terraces with a cafe, climb the citadel.

An impressive citadel, built in the 16th century on wooded green hills over the city, served to protect the coast from aggressive conquerors. It has a beautiful view of the city and the sea.

The Citadel Saint-Trail of the early 17th century is now transformed into the National Maritime Museum, dedicated to the history of French Maritime. From the roof of the citadel, you can admire a breathtaking view of the Saint-Tropez and the surrounding port cities.

The magnificent castle of Chateau de la Mutt, located on the Saint-Tropez Peninsula, belonged to Emily Olivier – the head of the government of the second empire. It extends to the sea and includes a botanical park for which you can walk on certain days.

One of the main tourist attractions is the art museum, which occupies the former Chapel of Notre Dame de L’annessyad (Chapel of Annunciation), built in the 16th century, a few steps from the harbor. Today, different works are presented in the museum: painting, graphics and sculpture of the 19th and 20th centuries. From the observation deck of bastion, viewed views of the s-trail bay and the mountain range of the array de Make.

Maison des Papillons (Museum of Butterflies), where more than 35,000 exhibits are represented. The collection includes exotic and rare species, such as black Apollo. Samples are sometimes presented in the natural environment.

Additional information! San Tropez is known for its Lighthouse Kamarat, one of the highest in France, 130 meters high. The radius of its fire is more than sixty kilometers. It was included in the list of historical monuments in 2012.

In the Saint-Tropez pass incendiary parties and discos. Nightlife is very busy. At about 23:00, nightclubs open their doors and greet night visitors to relax until dawn. Every evening, private parties are held at luxury villas at the Bay.

The coast of War offers many sandy and pebble beaches.

On the Cote d’Azur Saint-Tropez, located in Var – 6 long sandy beaches. In the west, the big beach of Buyabes, in the old village beaches Ponch and La Fontonet, the Beach of the Grande is a variety of sea cemetery, the long beach of Canbier and at the end of the peninsula, Beaches Mutte and Salins.

Beach Buyabes extends about 500 meters. It is located in front of the entrance to the Saint-Tropez, which comes from the port-grima. Available to all, it is very popular among families, for people with disabilities. Nearby are restaurants overlooking the Mediterranean Sea and the Saint-Tropez Bay.

Ponchon Beach and Fontnett are closest to the center of Saint-Tropez. The beach Ponchika extends only 50 meters available only on foot from the port or Citadel. There is a concrete space with a staircase to enter the sea.

Beach Fontnett At the foot of the Citadel, is a mixture of pebbles and sand, it is very easy to reach it from the historic center.

Beach Caunubia – Beautiful sandy beach extends about 200 meters. Located four kilometers east of the historic center of Saint-Tropez, it is available for people with disabilities. Pine on the sand creates a desired shadow in summer.

The delightful sandy beach is located right near the Citadel, on Chemin Des Graniers, so it is also called just des graniers. This is the wildest beach in close proximity to the city center.

Not far from Saint-Tropez is the famous Pampelon area. About 40 different beaches are scattered throughout the peninsula, where you can easily reach the city center. It offers many private or public sandy beaches on a five-kilometer coastline. On the embankment full bars, cafes and souvenir shops.

Beach Pampelon is considered the best on the Cote d’Azur. It is about 5 km from Saint-Tropez.

The beach is located on a long cape with small white sand, which smoothly contrasts with the color of the blue sea. Nature lovers will be able to stroll through the pedestrian trails crossing the Saint-Tropez Bay.

Additional information!the most beautiful of the most expensive – Tahiti Beach. It is now a meeting place “Rich and Famous”: luxury parties and informal competitions whose yachts are longer and more expensive.

De Grande is a sandy-pebble beach, located surrounded by nature, with many rocks. Beautiful white sand and crystal clear water. Near the beach there is a restaurant des graniers.

The beach de la buuyabes is considered one of the favorite among tourists. This White Sand Beach offers a beautiful view. Water here is crystal blue.

The beaches of the Saint-Tropez offer many water sports. To relax with the family, you can rent a water bike or kayak and take part in excursions with oars. You can also learn to dive with scuba and admire the seabed in the marginal fish.

In the amusement park on the coast of Var, with many slides and pools, both for children and for adults, you can relax in hot summer days and have fun.

By plane from Nice Airport or Toulon Airport. Nice International Airport is about 100 km. The second is often less serviced, but it is closer (50 km). You can rent a car to get to the port of Var.

Saint-Tropez – an exquisite port city, is a popular place not only for the highest society, but also for artists and tourists. Every day, new people from all over the world come here to get closer to the charm of the former fishing village.