The Arab country Oman is located on the southeastern coast of the Arabian Peninsula. From the south it is washed by the waters of the Arabian Sea and the Indian Ocean. It borders with the United Arab Emirates in the north, Yemen – in the southwest and Saudi Arabia – in the West. Partially borders pass through the deserts, so not clearly designated. 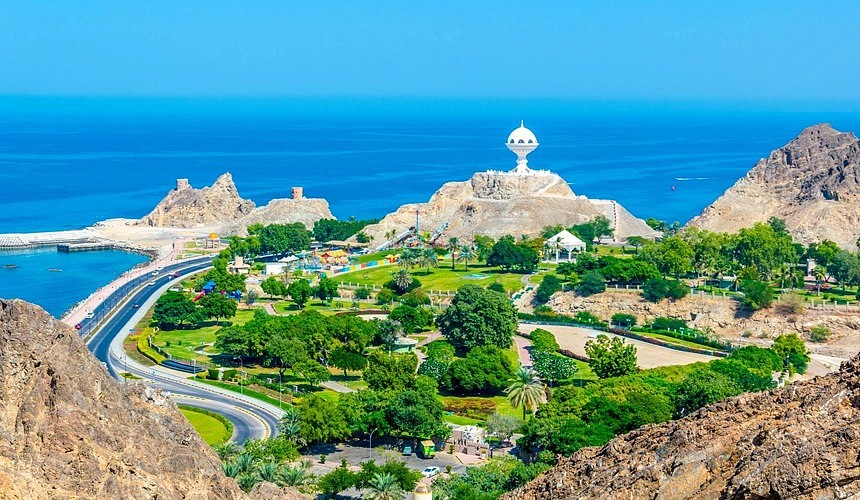 Features of the country Oman

The country in the southeastern part of the Arabian Peninsula is very diverse. Part of the country is a desert, from the north bordered by mountain ranges. In the northeast, along the coast of the Oman Bay, a narrow strip stretched seaside plain El Batina. West extends the mountains of El Hadzhar-El Garbi and Mount El Ahdar, the south of which is the Oman Plateau. At the plateau itself, vegetation has the character of Savannah and a steady. Among the trees are dominated by acacia and dragon tree.

West and south of the Oman Plateau dominate the desert with rare floral cover. In the south and east, the desert borders on the coast, which unites the main cities of the country: Muscat (the capital of Oman), Sarok, Sur and Salala. At the extreme south of the country – mountains again appear in Dofar.

Additional information! Sultanate Oman, as well as the people around him, benefits from oil, and its deposits are mainly located on internal plains, where tourists do not come.

In Oman, many historical monuments.

Muscat – the capital of Oman

The capital and largest city of Oman is a city of Muscat, a seaside city, and an important port. Ancient megalopolis with narrow streets and beautifully decorated gates is considered one of the most beautiful cities of the Persian Gulf.

Al-Alam Palace (Sultan Palace) – one of the most interesting examples of modern Islamic architecture in Oman, built in 1972. 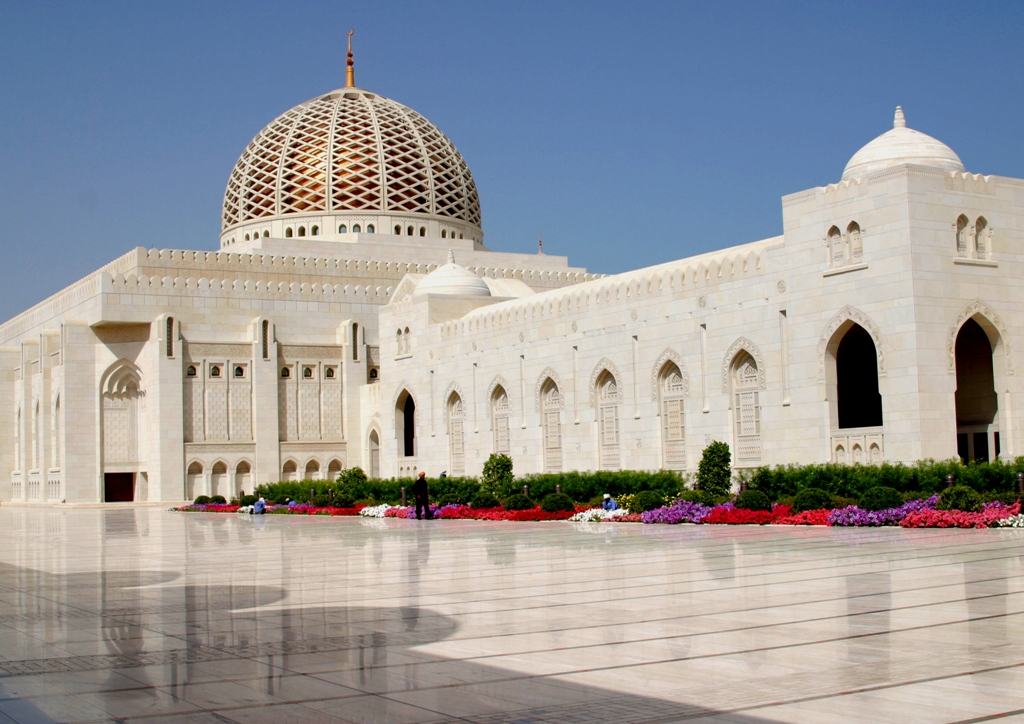 Sultan Kabosa Mosque in Muscat – an impressive building in the city, the largest mosque in the world.

Three fortresses that played a significant role during the Portuguese invasion dominate the city. Currently, they are used by the military, so there is only the opportunity to inspect it outside.

The magnificent opera house is a great cultural value of the Arabian Peninsula.

You can learn more about the culture and history of Oman, you can visit the Byte-Al-Zubayar Museum and the Sultanate National Museum in Muscat. In museums, traditional weapons, bathrobes and works of Oman are exhibited.

History lovers worth visiting Fort Al-Jalali, which was built back in 1580.

The magic of the East is especially noticeable in the Mutra market in the new part of the city. Here you can find all sorts of exotic spices, souvenirs and other products.

Muscat and Salala are an ideal starting point for traveling by Sultanat Oman.

Salalah – Center for South Oman, and the second most important city, are in demand among tourists mainly due to a pleasant weather that reigns here from June to September. There you can visit beautiful sandy beaches and beautiful mountain ranges. The city is the starting point for traveling to archaeological monuments.

Barca is a coastal city in the Al-Batina region, in the north of Oman – a place where traditional corrides are held. There are several fortresses and forts, stretching along the sea coast, a beautiful historic building of Bait on Aman. The city is known for its fish, fruit and vegetable markets.

A diverse landscape of the country can offer deserts and oasis, hidden fjords in the midst of ridges and green terrace fields. 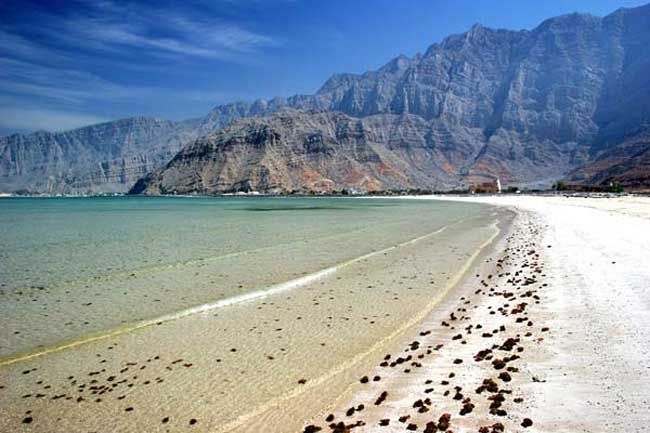 diverse landscape of the country

Dofar is an unusual province of Oman: arid plateaus and rich gardens, sand dunes of the Rub-El Hali desert and salt lakes.

In Dofar, in the south of the country, because of the rainy season from July to September, the landscape is lush. Banana plantations, manga and trees are decorated with salal.

Wadi Darbat – the most picturesque place is located in the Dofar region. It is distinguished by untouched nature covered with thick green cover, natural sources and caves.

The sea is home to corals, various species of fish and marine animals. At the shores you can see dolphins and whales. Turtles regularly come to local beaches to postpone eggs. The Turtle Reserve is close to Sura, on the beach Ras Al Hadd. Beaches in the Dofhar area full of flamingos.

Oman is also an ideal place to observe birds. Thanks to migration routes, more than 460 different species were registered here, about 80 local species live.

Most of the Oman is covered with desert. The most famous desert is the sands of Vakhiba. This is the place of beautiful dunes, up to 100 meters high. In the desert, the Vakhiba can be spent the night in one of the Bedouin camps, and at night to see beautiful bright stars. 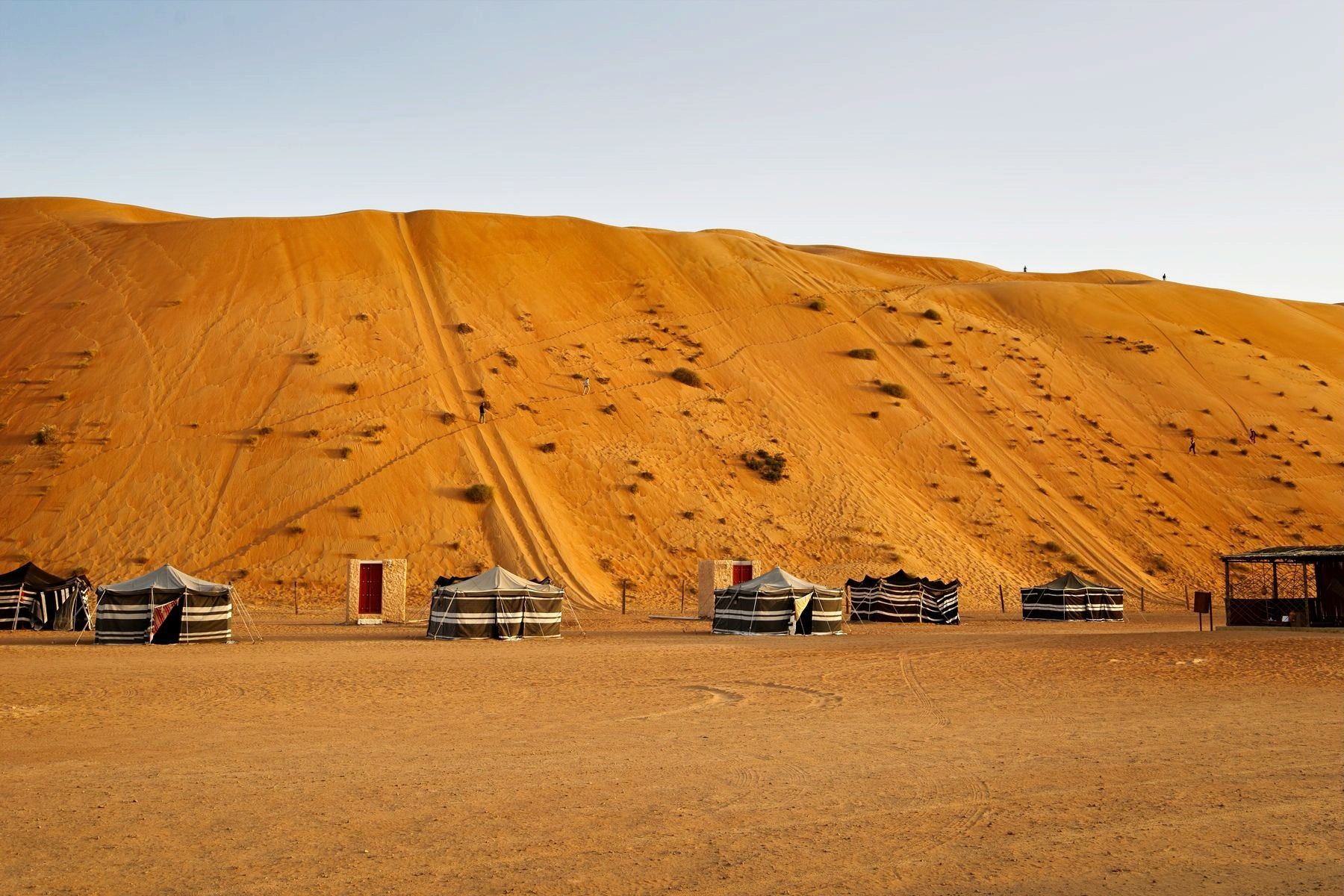 The natural wealth of Oman also includes numerous caves of different sizes. They are diverse, and in some there is a system of underground lakes. Many of them are open to visiting without restrictions, they are simple and safe. Others have a more complicated area, and require more experienced speleologists. El Hut at the foot of the Mount Jabel-Shams – one of the most famous cave systems in Oman.

Some regions of Oman with beautiful mountains. They are ideal for hiking and climbing of different levels. Mountain Hadzhar, on the territory of the Sultanate Oman, separate the fertile, coastal plain El Batina from the arid inland areas of Oman.

Jal Akhdar – Oman Mountain Range, which achieves the height of more than 3000 meters. Below the tops are typical Oman villages, luxury resorts. Here is a favorable climate, where you can enjoy the rich flora, which is not in other parts of Oman: Try local apples, pears, apricots or grenades, which are considered the best in the world.

Please note!on public beaches it is necessary to follow the rules of Arab culture. On the beaches of silence and peace.

Along the coast, resort hotels offer a high level of service. The sea is clean, medium visibility under water 20 – 30 m. The underwater world hides numerous corals and colorful marine life. You can add snorkelling, diving, windsurfing, kitesurfing and other water sports to the beach entertainment of Oman. 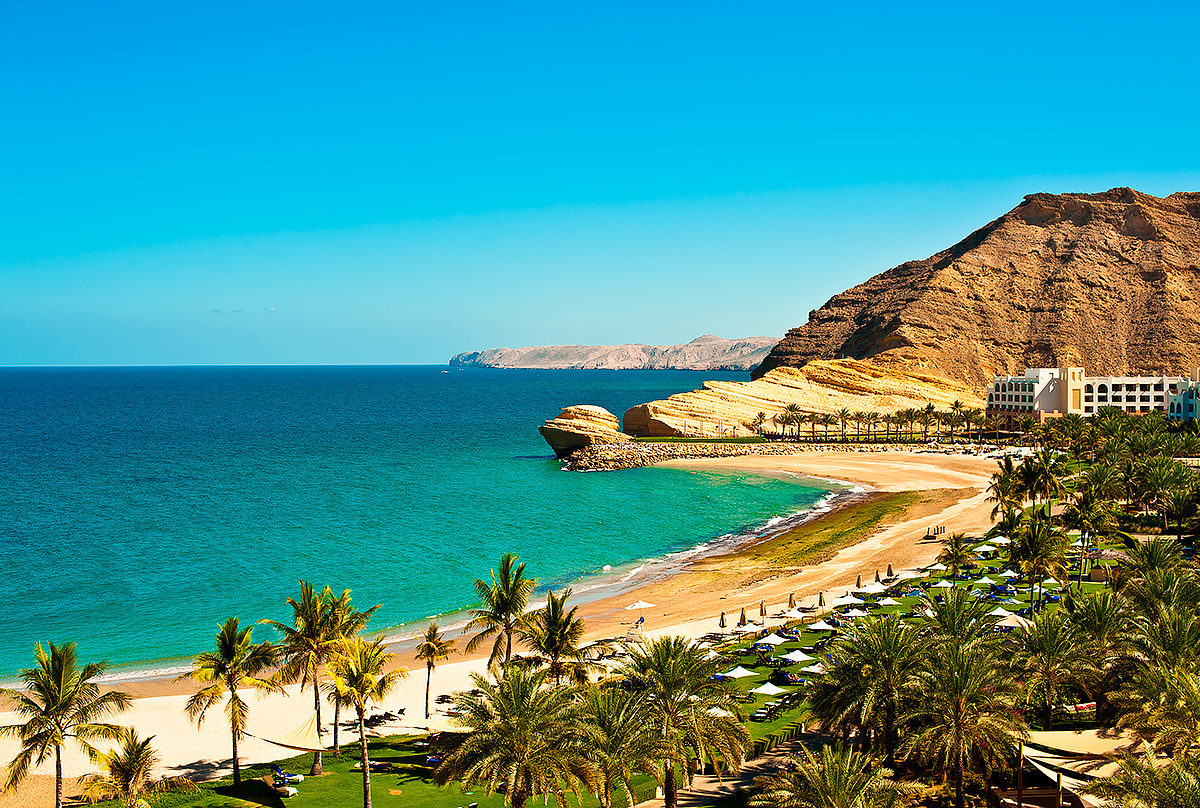 Among the popular Beach, Qurum Beach, which is suitable for families with children. There are many restaurants, bars and cafes. Services on this beach also include a wide selection of water sports.

Mokalla Beach, known as the White Beach, is popular among lovers of night camping and interesting snorkeling.

The center of water sports in Oman is Al-Savadadi Beach, about 70 km from the capital of Muscat.

Oman’s climate Tropical, dry. In the spring and at the beginning of the summer, when the winds from the Rub-El Hali desert are blowing, in Oman, especially hot.

On the coast, the weather is warm and wet, and on land – dry, where in summer the temperature reaches 50 ° C. Even in winter the average temperature of the sea is about 25 ° C, so the time to relax in Oman is coming all year round.

The tourist season begins in October. Most people come here in the spring until April, when the temperature is about 25-29 degrees of heat, and the country is green after the rains. In the summer, it is very hot (up to 50 ° C), and the monsoshs often come from the Indian Ocean.

The kitchen is also one of the pleasures of traveling to Oman. This is a mixture of Indian and Arab dishes with light spices. Fried meat in the style of Kebab spread on the streets. You can try a variety of meat types, including exotic camel meat.

It should be noted that the fact that there is free medical care (but does not apply to foreigners) and is at a high level.

Oman is considered a safe place to travel. People in Oman are incredibly friendly in relation to strangers. With no conflict, Indians live here and even Christians, which is an exception in the Arab world.