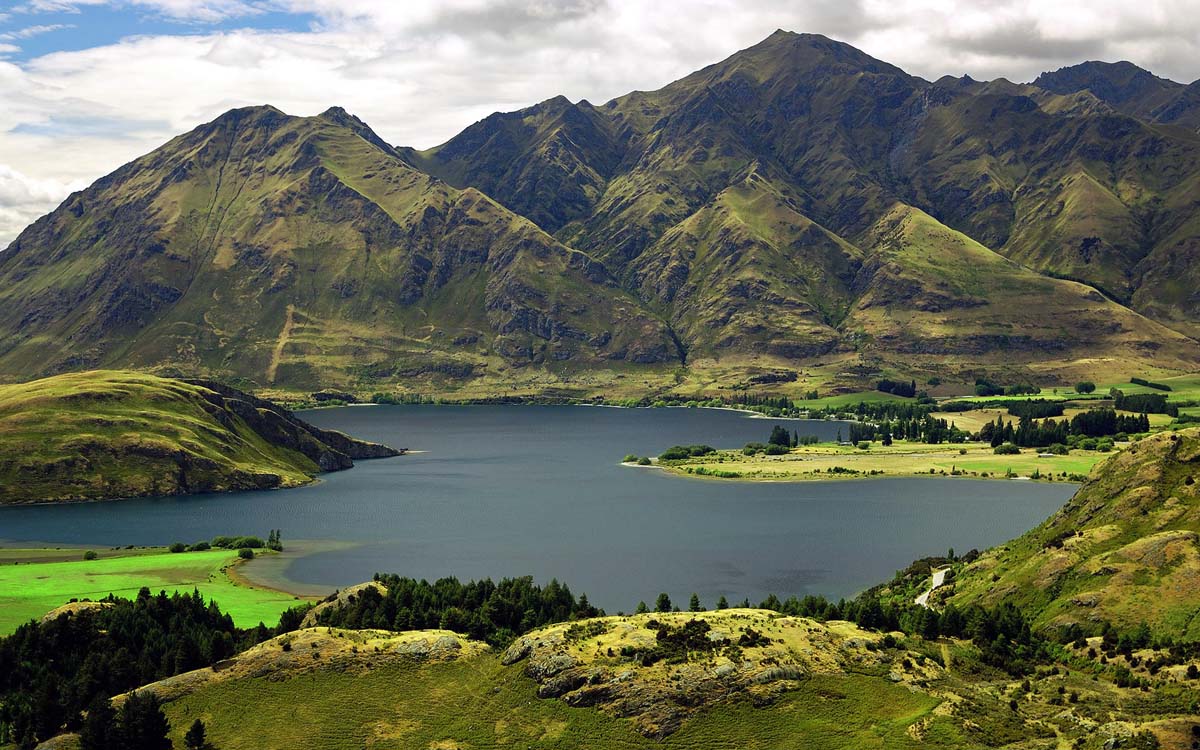 feature of the geographical position of New Zealand

Located in southern Pacific, New Zealand is the furthest country from Central Europe. It is divided into two main islands – North and South, and several other smaller islands.

The population of New Zealand is 4 million people, of which 3 million live on the North Island. Indigenous residents – Maori. Official language – English.

The surface of the landscape is mainly mountainous, with several large coastal lowlands. The highest mountain is Aoraki-Mount Cook, its height is 3754 m. 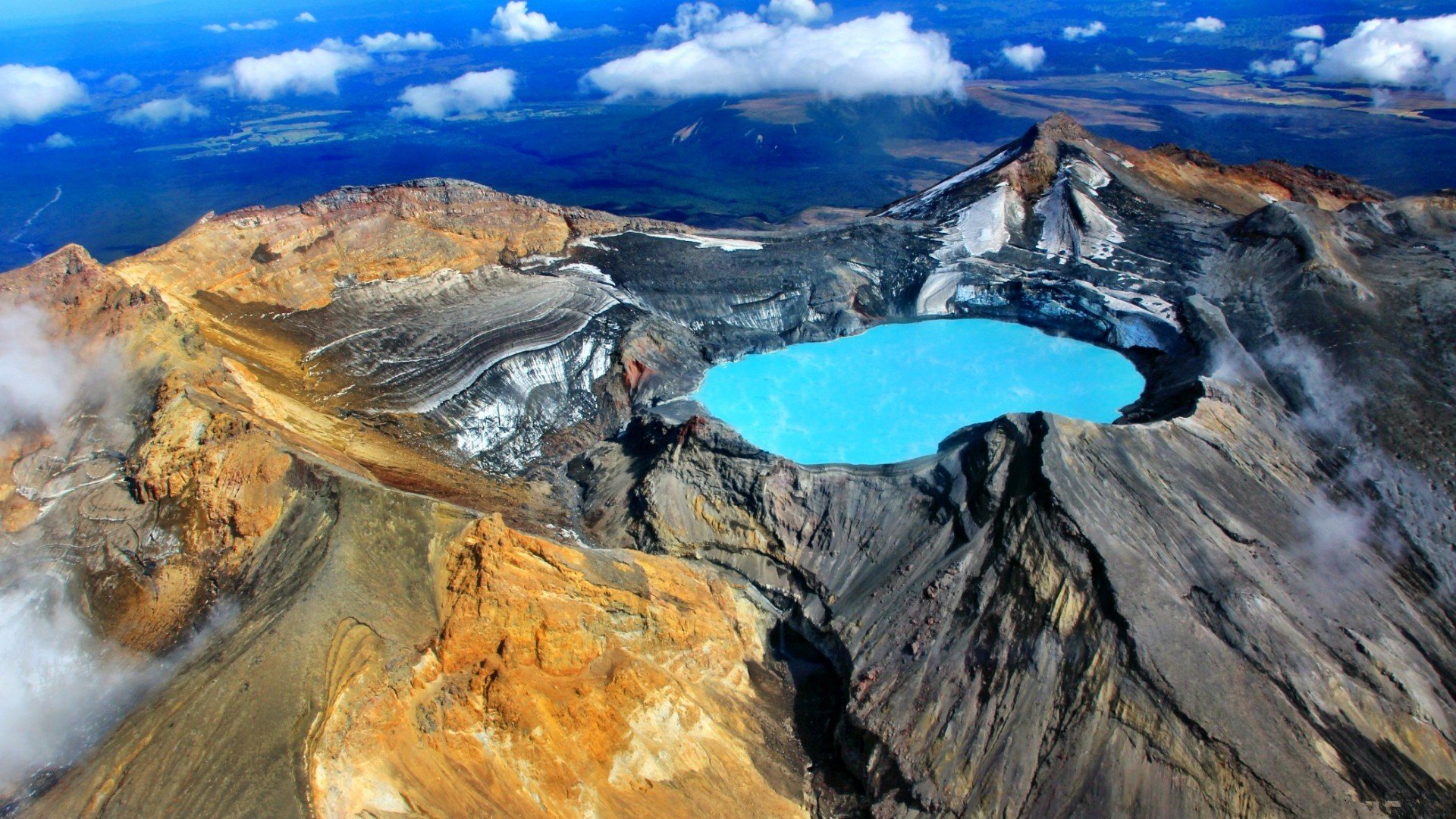 South Island is located on two tectonic plates. Some part is on the Australian Plate, and the rest is on the Pacific Plate.

The country is incredibly beautiful and diverse. In New Zealand, 29 regions, each of which has its own picturesque and cultural attractions. Different landscapes in New Zealand often create the feeling that these are several countries in one country: exciting glaciers, mountains and volcanoes, hilly landscapes, fjords, tropical forests to coasts with sandy beaches and rock facilities.

Wellington on the east coast of the North Island is the southernmost capital of the world. A charming small town with the influence of a megapolis: there, presumably, more restaurants than in New York.

In the Interactive National Museum, those dads can be found all about the history of the capital and culture of the indigenous peoples of Maori. You can admire the city from Mount Victoria. From above offers a beautiful view of the capital, an extensive botanical garden.

Additional information! If you plan to travel to South Island Automobile ferries go from Wellington.

The landscape is determined by dense rainforests, as well as gentle green hills and rocky volcanic landscapes. In the north, acting volcanoes, crater lakes, geyser and hot springs.

The island is known for its countless volcanoes, some of which still act. The volcanic belt runs along the Pacific and Australian continental plates. This is manifested in hot springs and impressive heyser by lust.

Volcano Tongariro in the National Park of the same name is one of the most famous. 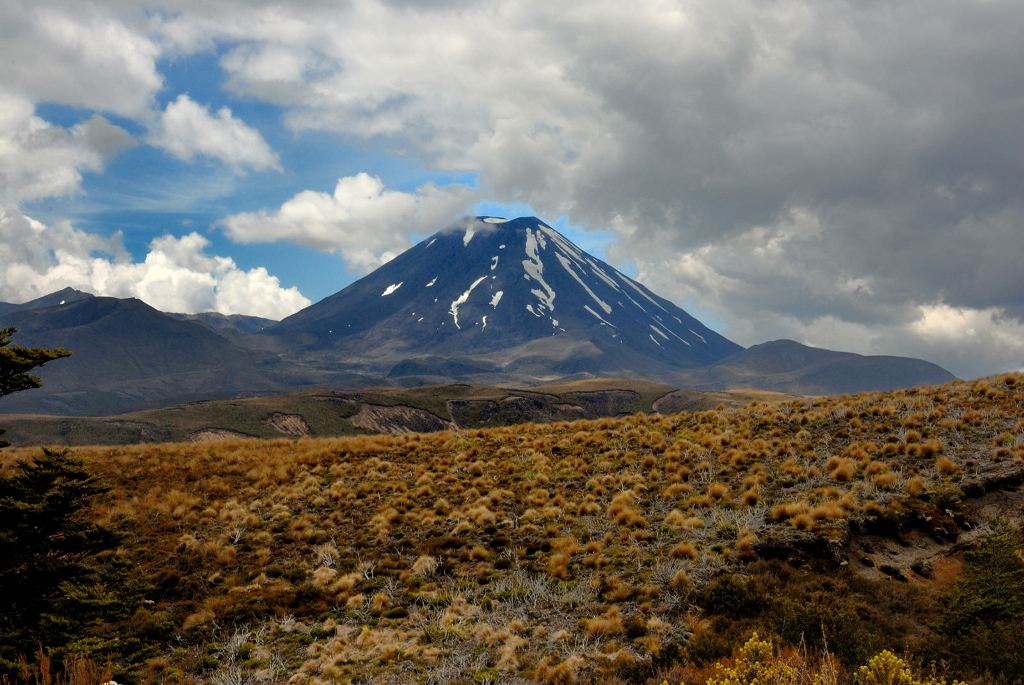 A 20-kilometer pedestrian trail leads directly over the volcano and past the emerald lakes.

Auckland is the largest city of New Zealand in the extreme north. Most travelers arrive in Auckland, where the country’s largest international airport is located. There are many inactive volcanoes for which you can climb. Ascent to Mount Eden opens up a magnificent view of the whole city.

The city of Danidin famous for its Scottish wealth and Victorian style. Monuments include the so-called first church in Otago, Larna Castle, and even the historic building of the railway station. On the east coast, Danidin can see rare yellow-eyed penguins, sea cats and dolphins.

The city of Rotorua was built on a volcano, and many tourists come here to see a geothermal sight. In the ranuit there is everything, from geysers to hot springs and raging mud pools, and in the air always hovers a sharp smell of sulfur.

One of the most popular attractions is a geothermal field, with several geysers with a blue swimming pool. In addition, the center of Rotorua has a free park, where there are also hot springs and mud bass.

Additional information! In the forest Vakarevarev, you can see all ferns and giant sequiques that are known only in California!

The picturesque National Park Tongaririro is located in the center of the North Islands on the Central Volcanic Plateau with three acting volcanoes. The most famous of them is Mount Nguruo.

The famous walking route Tongariro leads around the volcanic hill of Nguruo. The path overlooks the operating volcano Rupeju and volcanic lakes.

Cape of Ring, with a legendary lighthouse in the Northland region north of Auckland – the northernmost point of New Zealand. In the Gulf of Islands, beautiful beaches, where you can deal with sailing, sailing and surfing.

The beautiful Peninsula Koromandel attracts fabulous beaches, a lot of hills and tropical forests. One of the most famous hot springs in the area is located on the beach of hot water. The most famous part of the peninsula is the cliff “Cathedral Bay”.

South is located Taupo town on the shore of the same lake. Lake Taupo – crater lake and the largest lake in the country. Water in it is incredibly transparent. In the Western Bays of the Lake, there are famous Maori rock paintings, some of which reaches several meters in height.

The nearby hook waterfall, about 11 meters high, is impressive. 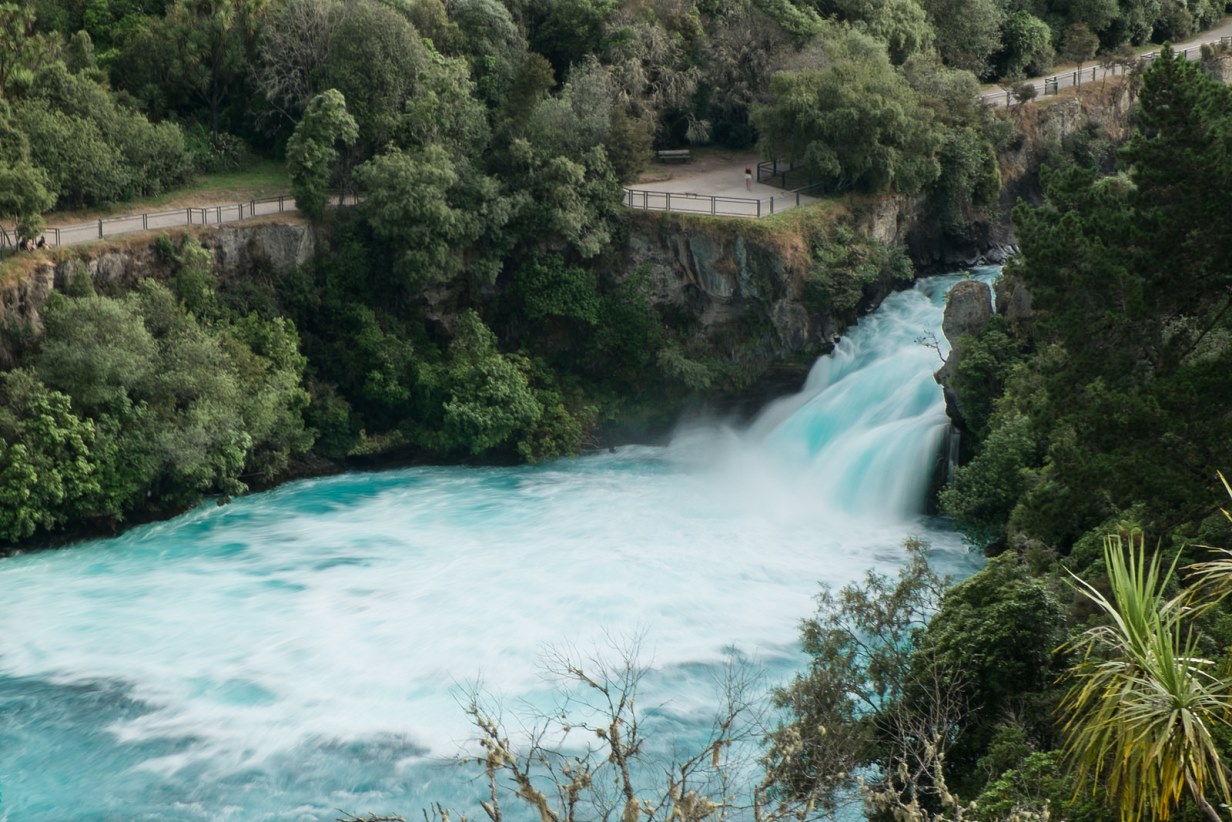 The beach with thermal water is a highlight among many beaches in the region.

Christchurch – a quiet metropolis of New Zealand. There you can stroll through the markets and shopping streets and enjoy nature in the Botanical Garden. In the surrounding area you can see the smallest dolphins in the world: in the harbor of Akaroa there is an opportunity to observe the jumps of dolphins. In Willubeck Reserve, you can climb the National Birds of New Zealand – Kiwi.

The city of Queenstown is interesting for lovers of outdoor activities. They are attracted to riding on mountain bikes and water bikes, paragliding and bungee-jumping. Queenstown is located close to Lake Vakatype. For lovers of nature with hikes with a guide, not far from the west coast, Franz Josef and Fox glaciers have special impressions.

in the country of fjords in New Zealand

The Fjordland National Park offers a unique landscape in the midst of high mountains, with a wide landscape with snow-covered vertices and sparkling fjords, rivers and waterfalls, is the largest in New Zealand.

The park is the natural attraction of New Zealand – Milford Sound, the most affordable of all fjords. Fjords are formed mainly only in the countries of Northern Europe, and since New Zealand is a mixture of various natural beauties, you can meet several here.

A huge tourist attraction is the Southern Alps, which stretch along the entire southern island. Here is the Mount Cook National Park, which is called such a name as the highest peak in the state. In addition, the park includes eight of the twelve New Zealand glaciers who cover up to 40% of its territory.

the most beautiful beaches

The length of the coastline is up to 120 kilometers. One of the largest attractions of the Southern Island is Koekoch Beach. The beach is famous in the main boulders of Moerac, who separated from the rocks due to erosion. The longest about two meters in diameter.

Abel Tasman is a beach with a famous granite rock, resembling an apple cut in half.

Muraway Beach is located in the western part of the North Islands. This is the place where the flocks of rare marine birds are going – white beer (in English by Olusha). Sea birds, build their nests here and remove chicks in the period from August to March. 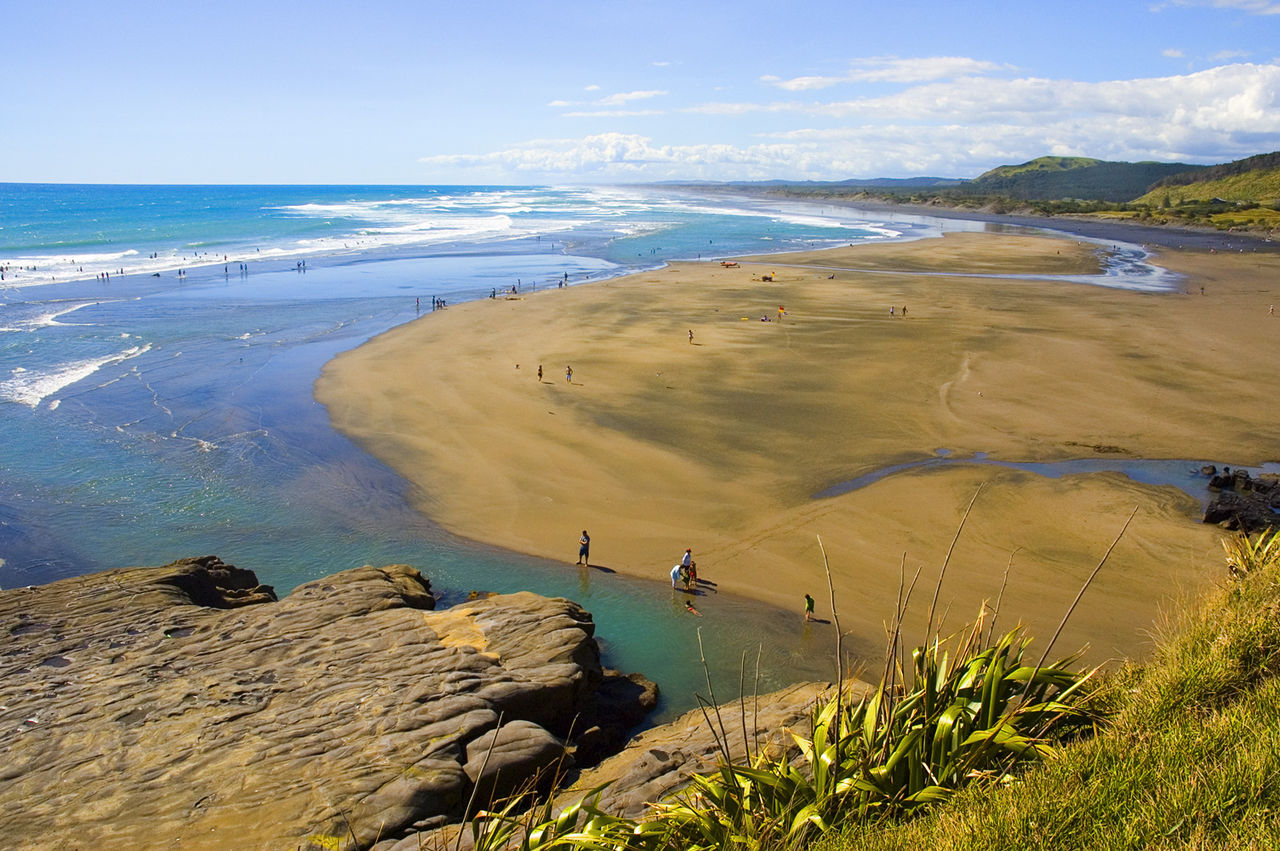 Peah Beach is located in the northern part of New Zealand. Here are the ideal conditions for surfing, educated dunes, as well as nearby caves. During the low tide, you can get closer to the rocks, and water will not hurt to get into the caves.

Waitomo caves are not ordinary caves, because here you can admire the fireflies. They hang on the ceilings of the caves and you might think that you are under the stars. From Waitomo’s caves, there is a small village of Ozerohanga. There is a house of Kiwi and the park of local birds, where Kiwi is bred, which are then released into wildlife in safe places.

New Zealanders are well caring for all visitors, and all are respectful, no matter where they come from!