Abu Dhabi and Dubai are the two most popular places in the United Arab Emirates. Abu Dhabi is located on the southwest coast of the Persian Gulf, borders with Oman and Saudi Arabia on the mainland and has a naval border with Qatar, Iran and Pakistan. Its rich oil fields, both on land and in the Persian Gulf, make it together with the neighboring dub that the prosperous Emirates of the country, the richest of the seven Emirates. 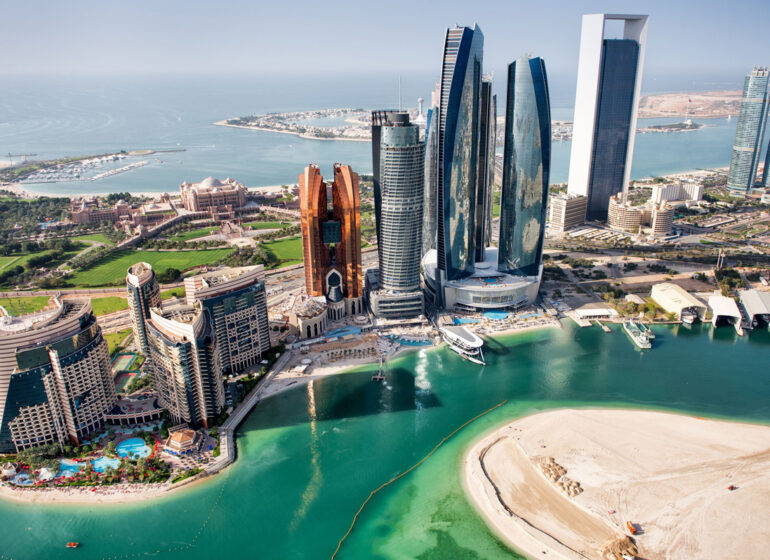 Abu Dhabi – the capital of the United Arab Emirates fascinates visitors with wealth and luxury.

Abu Dhabi culture is rooted in Arab Islamic traditions. The cultural heritage of the United Arab Emirates is inextricably linked with religion: the commitment of Islam to tolerance and hospitality. The hospitality of local residents is very well known.

Tourism plays an important role in the economic development of Abu Dhabi. The best time to visit the Emirate – from September to May. In the summer months, high temperatures are accompanied by humidity up to 80%.

Although the climate is arid and hot, a little natural nature has been preserved here, namely the mangrove forests (those that prefer salted water). On one of the islands in the city is Eastern Mangroves Park – one of five parks. There, among mangroves, turtles, skates, marine snakes, crabs, black herons live. You can move around the park on a boat with an electric motor.

Abu Dhabi is the capital and the second population of the city of the UAE after Dubai. The city is recognized as the largest political, industrial, cultural and shopping center of the state. The city of the UAE President lives in the city. This is the residence of the government of Abu Dhabi Emirate. Skyscrapers and business activity are concentrated in a business district, and the rest of the city: private homes and villas with gardens. There are several universities in Emirates,

The city is located on the T-shaped island, protruding in the Persian bay from the central west coast. In the middle of the endless sandy desert – the largest green oasis. “Garden city” – the former desert strip today includes numerous parks and gardens.

The rapid development of the most green city in the UAE fell on the 60s of the twentieth century, after oil deposits were found. Also the main source of income for the whole area is the cultivation and sale of dates. On a plot of 1200 hectares, almost 150 thousand dates 100 species are growing here.

interesting!Not exactly ordinary grille facade consists of moving modules, retaining the cool temperature in the premises of the complex in the summer season. Under the influence of sunlight, the panels are disclosed if the illumination changes, the panels are automatically closed, creating a beautiful openwork pattern. Reduced by 50% penetration inside the premises of solar heat, the lattice facade provides free ventilation of buildings and reduces the need for artificial lighting.

The essential sights of Abu Dhabi

One of the largest and most beautiful mosques is in Abu Dhabi. It is the most important place for worship in the whole country. Built by Sheikh, and named after his, founder and first president of the United Arab Emirates, the mosque is decorated with precious stones and marble walls.

The area of ??more than 120,000 m2 it has 80 domes and more than 1000 columns. It can accommodate up to 40,000 praying. You can see the largest wovel carpet in the world to which 38 tons of cotton and wool took place. The chandelier in the main hall, 15 meters high and weighing 12 tons, entered into the Guinness Book of Records for its sizes. At the entrance to the prayer room, you need to remove shoes.

Kornish Embankment is the most picturesque area of ??the city, framed by beautiful parks known for its fountains. Favorite place of residents and tourists, where you can walk and spend a few hours on the beach. This area with a panoramic view of the city on the one hand, and always a calm sea thanks to the artificial island of Lulu, on the other hand. 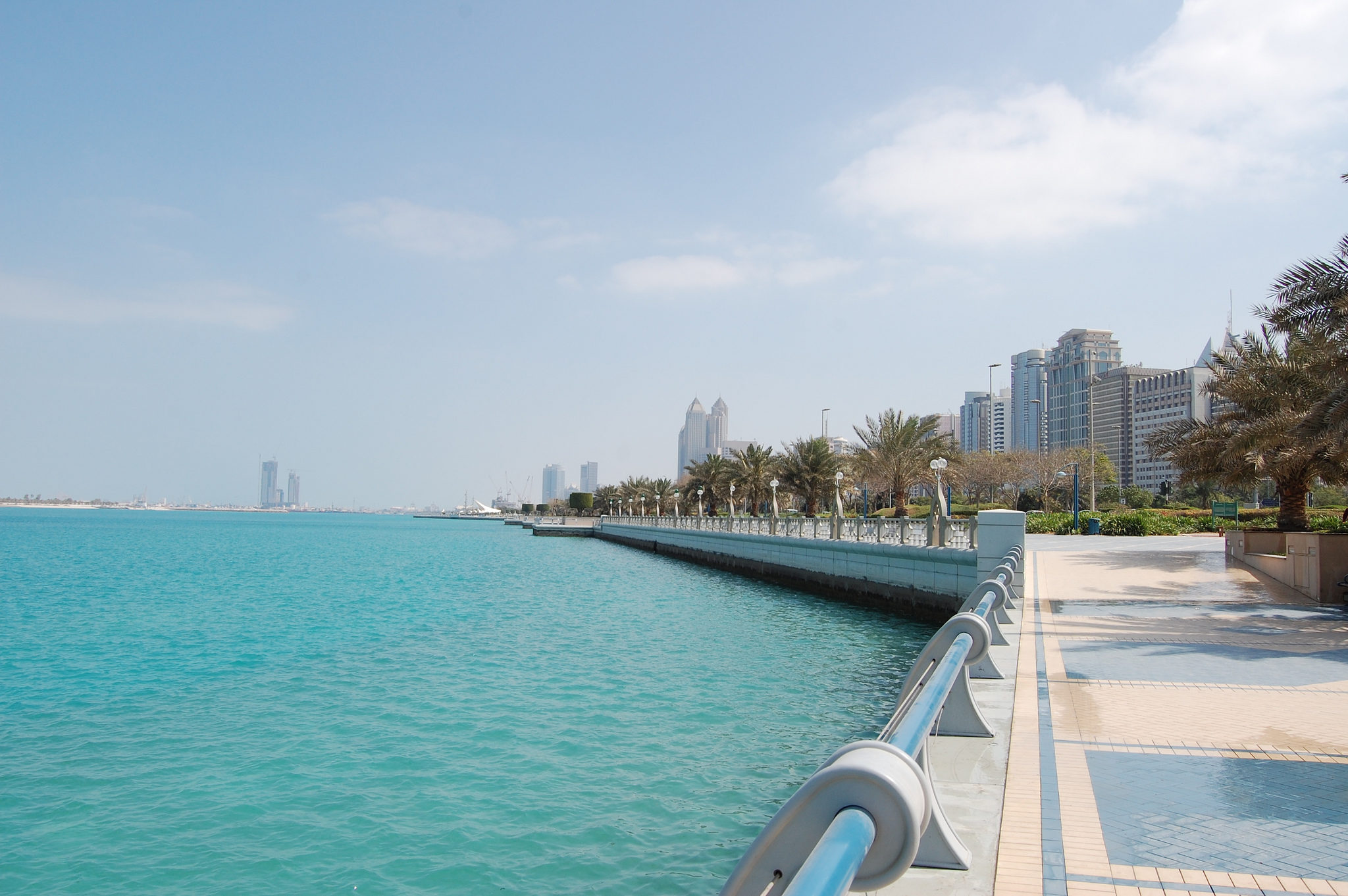 Opposite the Kornish beach is Al-Marina Island, one of the most vivid tourist places in Abu Dhabi. On a small island there is a tourist port of the city, as well as the MARINA MAL shopping center.

Yas Island: Known as Ferrari Island. On this small artificial island of the East Coast Abu Dhabi, there is a famous Amusement Park Ferrari World.

Al-Ain – an ancient city, known as the “Garden City” of the Arab Emirates, is located on the border with Oman in the middle of the desert. This is the place of birth of Sheikh Zaid, the first president of the United Arab Emirates.

Many attractions indicate Al-Aina cultural heritage. There are three fortresses on the territory of the oasis, in Forte on the eastern tip of the oasis there is the National Museum of Al-Aina, the oldest museum in the UAE. The museum of two departments: archeology and ethnography.

In addition to historical buildings – a rich natural heritage. There are many oasis in the city, including the Al-Ain Central Oasis – a green zone with many palm trees. 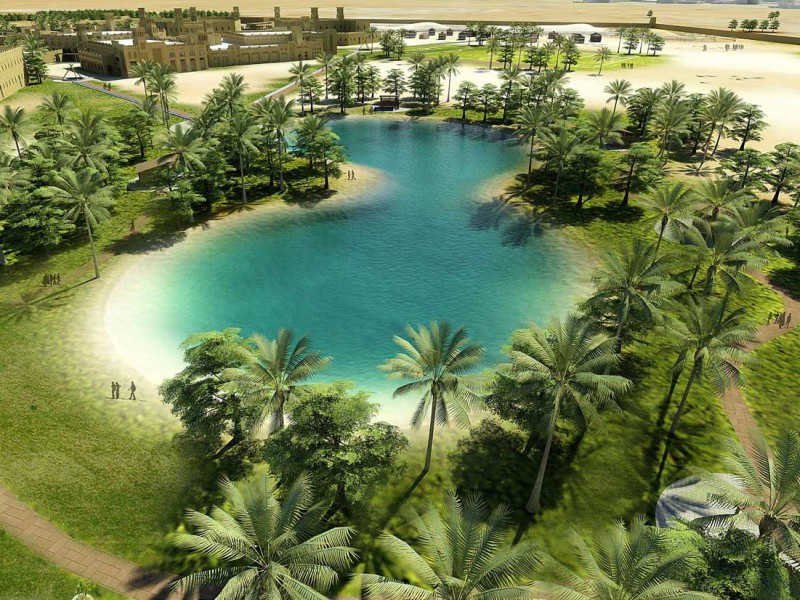 Located in the center of the city of 1200 hectares of lush greenery irrigated by the system of channels and sources, the invention of which dates back to more than 3000 years ago.

Additional Information!The famous palm oasis is one of the most popular attractions of the city.

The zoo in which more than 4,000 animals live (from reptiles to mammals). 30% of those present animals belong to the endangered species. In many cases, animals can move in a natural habitat, and not in the cell.

The path of camel junctions and cattle market allow you to get acquainted with the everyday life of the city’s inhabitants.

Abu Dhabi is serviced by Abu Dhabi International Airport, which has significantly expanded at the beginning of the 21st century. The port of Zeda is a major center of shipping and the main cargo port of the Emirate.